Lately, I have been thinking about writing about having two children under the age of two. But I have been kind of hesitant, because I don't want to appear all 'look at me and my hard life... wah!' when the reality is, I chose this. Plus, I know other Mothers with more on their plate than me; single mothers, mums with three under four, two under three, one amazing woman I go to playgroup with has four boys under the age of four. So I don't want to appear to complain.

But then last night, I was prompted by Loz from Ninja Tales, and Erin from Eat Play Bond to talk about life with a toddler and a baby. And I thought, you know what? I'm going to do this. Because two under two may seem like no big deal when you've got five, but it is a very big deal when you're wrestling with one and wondering how on earth someone could possibly do another. I know I used to wonder how I was going to cope.

So, two under two.

Basically you get amazingly exhausted in a I-didn't-believe-it-was-possible-to-exist-on-such-little-sleep way, and there is much, much less space.

Things like shopping, going to the park, going to a friends, getting a babysitter, are a lot harder than they were when there was only one. You become very, very good at forward thinking. I am constantly planning and preparing for what's coming next.

Funnily enough, my house is much cleaner, and much more organised than it ever was when I was a Mum of one. Because I have to be a bit more organised. There is less 'I'll leave that for later' because you know that later, you probably won't have the opportunity. So you do what you can when you can.

But it's not all bad. Having a baby the second time around isn't the same life-altering experience that it was the first time. Because you are already a mother. You know how to do this, because you've done it before. You know what it's like to stay at home with a child all day, you have developed routines to your days. You already have friends who are Mums (hopefully). And that makes coping much easier.

The sibling thing is also pretty cool. There is also nothing cuter than hearing Georgie say her brother's name. "Yarlie". I love how much Georgie loves her brother. And Charlie just worships the ground she walks on. Georgie is constantly giving him squeezy cuddles and squelchy kisses, but he doesn't mind, he just thinks she is wonderful.

I can see the benefit in having your children so close together. Georgie hasn't really had much time to develop without having a brother.He was born when she was 17 months, and I think having him around is probably all she remembers now. So she has never really displayed jealousy, or rivalry. She just adores her brother. However, in saying that, that may just be her too. Another child may not act the same way. Plus, it is still early days. I can see already that she can be a bit grumpy when he touches her toys! But they are good friends. And I love that. 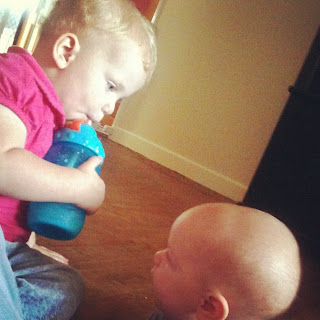 You also get to enjoy your second baby more, I think. The first baby is all about you. You as a Mum, as an emotional milk machine. The second time around, you know what's happening, and it is much easier to roll with the punches. You also know how fast they grow, and so you can appreciate them in each stage a little more. You really get to enjoy the snuggly baby cuddles, because you know they are so fleeting. 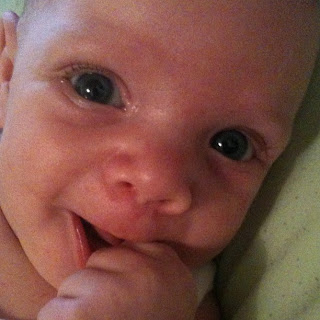 Some days you get to the end of the day with your head held high, feeling like you are a good Mum... other days you end up a frazzled, tear sodden, twitching mess, patting a screaming baby muttering 'Go to sleep Charlie. Charlie, go to sleep." But that's true no matter how many kids you have.


It is hard work. But the second child becomes yours just as completely, just as much as the first one did. They become a part of you, a part of your family, so very quickly. I could not imagine life without Charles now.

So yes, you will be exhausted beyond belief. More tired than you thought possible. And sometimes the craving for a break, for some space will be almost overwhelming. But  the fact that you love them and they belong to you makes it easier. 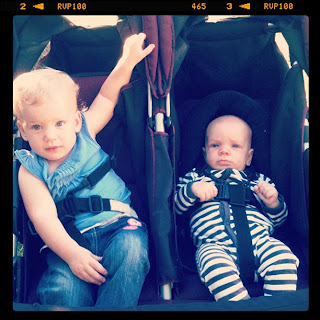 Linking up with Diary of a SAHM, for #IBOT. Go check out some of the other bloggers who blog on Tuesdays and tell poor Jess to feel better soon!